Am in a bloody lousy mood.
I just lost  RM180 just like that. The bloody dog chewed on it. Gone… my power adaptor gone. Dead.
Feel like kicking it and hearing it yelp. Argh.

What rotten luck. Wonder if any compensation would be made to me or will it passes me by.
Can I pummel the fellow and bury her head in? Argh. 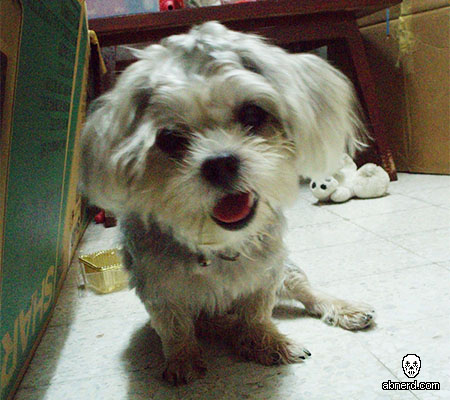 Adoption Canceled
My friend is moving to a new place and it seems she does not have much space for Terry anymore. With heavy heart she has to give him up for adoption.
She had the dog since June 2006… when he was still a pup. Am not too sure about the breed though.
Saw him once and he is one healthy, mischievous, funny and cute little one. Toilet trained. Follow commands like roll over, sit and other stuff.
Anyone interested? If yes, check out her blog and contact her or leave a message here and I will let her know. Cheers!

More Updates:
It seems that auntie (dragon girl’s mama) has kinda feel attached to Terry and now he is staying put. So the adoption is off. Thanks a lot for all your kind attention though.

But to hell with it… everything is fine now. Am so glad.
I could tell when my phone started playing Scooby Doo’s theme song. I spoke to C earlier after dinner regarding our trip to Muar, so there was no special reason for him to call me again. I had been secretly hoping that the poodle will find his way back to C and YF’s arms. Not forgetting GSC @ godmother too although she is far away back north. Been a gloomy week ever since last Merdeka as Casper staged his own big break leaving his sister, Crumbs behind. C and YF looked sad and listless even my aunts speculated that they cried before coming to dinner. They rushed straight back after receiving a call from their groomer saying that Casper was spotted. Alas, it was a false alarm.

Anyway, my bro voiced out his plight in a pet forum and someone got a whiff of it and called C after spotting Casper. He wanted to delay the news but he sucked at it cos his voice was filled with excitement and I could hear YF’s happy voice behind. Sorry bro, you can’t Gotcha! me. 😛
Guess C have to do something to the gates now. Better be safe than sorry. Luckily it ended well. *relief sigh*
No more sad emo MSN nicks. Thank god.

Any of you out there had their beloved pets went missing before?