Well I do step on my own pair of Converse. I don’t really like the clean look of it anyway. Never would I have thought that some day someone will make a short movie out of this.

According to StatsCounter.com, a lot of people have been coming to my site when they are searching for Kung Fu Panda stuff. It’s been a month since I posted the teaser trailer so I guess it’s high time to move on to their trailer. Got this from the official site.

For more info on characters check out KungFuPanda.com

Headed over to Paddington House of Pancakes for dinner before going for the free screening of Across the Universe yesterday night. The meal at Paddington was scrumptious. Used the Mystyle voucher and it came free with a complimentary pancake. The people there will give you a list and you choose either a savoury or sweet. Asked the waitress to recommend and she asked us to go for the Pot of Gold. It’s mini pancakes topped with an ice-cream, laced with melted chocolate syrup and sprinkled with crunchy nut bits. Maple syrup are optional. It came first and we chomped delightfully on it. Our dessert cum appetizer haha… it was a taste of what will come next. 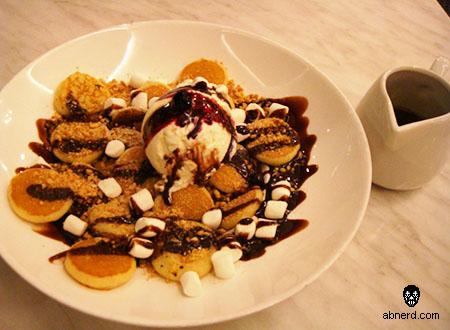 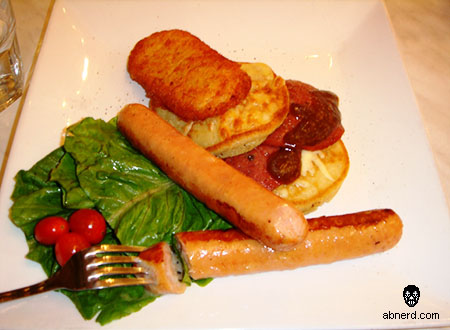 The next dish, the Double Gourmet Sausage came right after we finished our Pot of Gold… with a lapse moment just enough for us to get some liquid down. Two huge chicken cheese sausage, two beef salami, hashbrown, three cherry tomatoes, fresh lettuce layered on top of two lightly cheese-spreaded pancakes. Again, the pancakes were just the size of McMuffin. I initially thought it won’t be enough to satisfy both of our tummy but I was proven wrong. The sausage… mmm… was delicious with cheese oozing at knife point. The salami paired well with the pancake as it was a tad salty. The green vege and mini tomatoes gave the whole dish a beautiful colour and added a cool bite to the otherwise hot meaty dish. We practically cleaned the plate. We paid RM33.83 inclusive of a Iced Lemon Tea, warm water and tax. Oh the complimentary Pot of Gold was worth RM10.50. Hurried over to the cinema to catch Across the Universe.

Warning No Spoiler ahead.

Personally the movie is great. I loved it. I shall not elaborate on it but I am certain that many would think otherwise. For a free screening the crowd was not encouraging, many empty seats and quite a number left during mid movie according to my gf who was paying attention to the people behind rather than the movie. Yes, she is one of them who think the movie is crap. Luckily I met a fellow climber who shared the same boat as me. Both of us agreed it was cun melecun and would be getting the DVD version of it when it comes out. It kind of renewed my love for the composition of John Lennon and Paul McCartney and the different versions of the songs sung gives a different sound. Loads of things to look out for if you enjoy the movie. Shall stop here for now so as not to spoil the fun for those of you who plan to watch it.
Yes, my skeptical ass has been kicked hard.

Love. Yup, it’s a song title from The Beatles. And it’s the caption for the movie Across The Universe. Me like the Fab Four’s music. And dear gf got two complimentary pass to watch Across the Universe, a movie inspired by The Beatles creation. For all I know no, it’s a theatrical musical kind of movie. I don’t want to google too much about it so that I could be surprised by what is in store for me tonight. Frankly speaking, I am not that enthusiastic about it though. Good… let’s hope the movie kick my skeptical ass right between the cheeks. 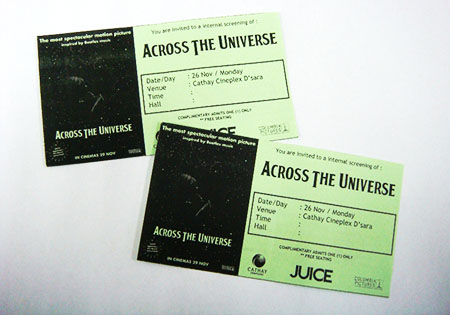 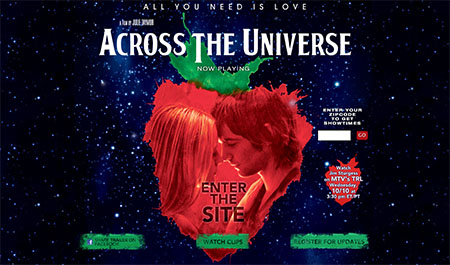 Geez… two and the half bowl rice, two plates of char siew, chicken, bean sprouts and barley makes you sleepy on a working Monday. And it’s been three straight meals of chicken since yesterday evening till today. I had the first one in Chicken Rice Shop (uek!), then another salted herbal chicken at my aunt’s place then lunch today at the famous char siew place in Alor courtesy of VinC. Yawn… 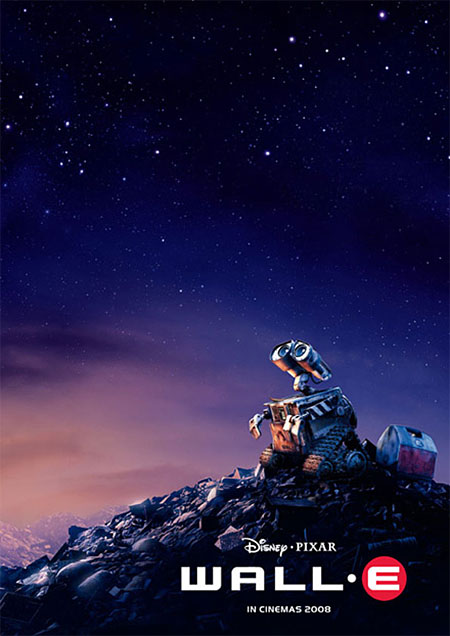 Watch out for spinning quadruple sidekicks and non-stop kicking and punching actions. But rest assure that there will not be any gory bloody fight scenes as it’s an animated Hollywood martial arts movie. And Jackie Chan plays a monkey. Master Monkey, mind you.

Needless to say it’s set in ancient China and the characters comes in the form of panda, tiger, crane, praying mantis, snake… rhino, tortoise and goose too. Jack Black will be the man behind the “chosen one” and Jackie Chan, Dustin Hoffman, Angelina Jolie and Lucy Liu are among the voice talents. There are not much information on Kung Fu Panda yet… but the teaser trailer is expected to be shown alongside the screening of Bee Movie on 2nd November 2007. One thing that you can expect from Jack Black is that there will be laughters and occasional tears. 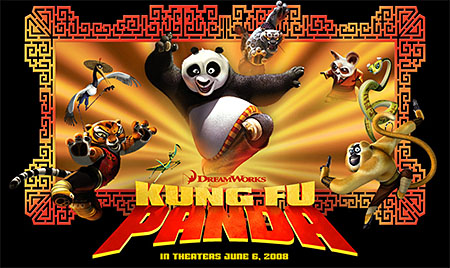 The artwork of the movie looks great and intriguing. Honestly, I caught a glimpse of the key art and it’s makes me wanting to jump up and kick the ceiling board. Duh… 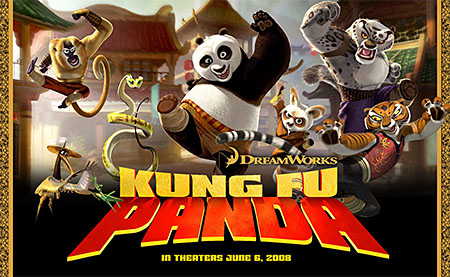 Save this as a wallpaper or to have a closer look at the details. It’s from MovieWallPapers.net

It’s expected to be a summer blockbuster movie for 2008 so go meditate in a cave for a while.

Incredible Hulk 2… bah the news did not generate enough excitement for me. This is because the previous Ang Lee’s bastardize version of the green monster totally blew it for me. All the hype built up around the famed director and the movie never lived up to it’s name, so naturally the second installment did not made me look. Lo and behold was I wrong. I sat upright when I saw Edward Norton’s name in it. It made me look twice. One of my all time favourite actor is in it. And he is also involved in the screenplay. How rad could it be…

I first noticed this dark versatile actor in American History X. Then there came Fight Club which solidify his presence. Enough about him… do a google search on him if you want to know more. I am waiting for June, 2008. Thump thump thump. No trailer found yet.

Oh and it seems Robert Downey Jr. has taken the helm as The Ironman. Another superhero movie to watch. Check out the trailer.

For Pirate’s fan, mmm… rejoice as Captain Jack Sparrow will be back in his quest for Fountain of Youth. The rumored fourth spin-off of the Pirates of the Caribbean franchise will see Johhny Depp reprise his swash buckling anti-hero Jack Sparrow but without Keira and Orlando. For this I think we will have to wait with bated breath. Won’t be happening next year I am sure.

Seems like the trend for superhero roles is no longer an opening for up and coming/unknown/struggling actors/actresses but a chance for established ones to save the world.

Had just walked out of the cinema after watching Ratatouille and yes, its good. The animation, the storyline and the feel good factor. Yummy. Should go and watch it. Food-4-thot had watched it too and she said it was good. Good animation plus good food… sure was fun huh?

Anyway as I was walking out of the cineplex, I saw this huge standee with a blood thirsty sheep. It looked kinda funny with blood and possessed eyes. It’s a New Zealand show and the CG effects are done by the people at WETA Workshops – responsible for Lord of The Rings. It’s called Black Sheep, a horror comedy flick. Quote from a reviewer – “Just don’t expect it to be s***-your-pants scary.”

Well, the movie seems to be a no brainer but what the heck. I might not be rushing for this one. If any of you watched it, let me know if its worth while.

The only NZ movie I remember watching and enjoyed was The Whale Rider. Oh yeah and lai@evil was the one who got it for me. Hehe… thanks again ya.

Am going for the latest animated film this week, Ratatouille by Pixar. Watched their trailer months before and friends who had watched the premiere have been praising it.

The previous movie from Pixar, Cars was a little disappointing to me. I have watched every single Pixar movie to date and I particularly loved Monster Inc., Nemo and Toy Story 1 and 2. Can’t wait.

Oh and I could not resist. Hehe…

Are the letterings too small for you? Or is it fine? Or whatever…

Related Links:
See how its done / The Art of Ratatouille

I don’t watch a lot of TV. It’s been that way for quite some years. But lately a few shows have got me hooked. One of it is the Criminal Minds. It tells the adventures of Agent Gideon, Hotchner and the rest of their BAU (Behavioral Analysis Unit) teammates . The concept of the story differs as it focus on the criminal themselves rather than the crime.
The agents does a voice-over of quote from famous author or poet that relates to the story at the beginning orthe end of the eipsode. Nice touch. Currently, I am watching Season 2 now and Season 3 would premiering on September 26th, 2007. Those who have not watch it before, give it a go. It’s kinda contagious though. Hachoo…

Psst. Just to let you know that Agent Gideon will leave the show. Oow…